The Political Intrigue of 1968—Fifty Years and Counting

My political interests were sparked at age 11, half a century ago, during one of the most interesting campaign seasons in recent American history. In my home we had neither a newspaper nor a news magazine. Our television reception was unreliable. Yet the stories were compelling. The favorite part of my day occurred when my bus arrived at school. I had 10 minutes to rush to the library and read the morning’s editorials. Who knew I would be writing op-ed pieces as a hobby 50 years later?

The sitting president, Lyndon Johnson, was rejected by his party. Granted, LBJ won the New Hampshire primary, but his weak showing (49%) compared to Sen. Eugene McCarthy (42%) convinced Johnson of his vulnerability. He declared, “I will not seek, and I will not accept the nomination of my party for another term as your president.”

Soon would follow the assassination of Martin Luther King, Jr., by James Earl Ray. Then the surprising late entry into the race by Robert Kennedy, his victory in California, and his assassination that night by Sirhan Sirhan. Suddenly my 10 minutes in the library were no longer sufficient. I started getting tardy notices on my report card. My intrinsic thirst for political intrigue had been ignited.

I learned a great deal about the personalities, headlines, and sound bites. My understanding of the Vietnam War, race relations, urban riots, and white supremacy, however, was infantile. Neither my parents nor my older siblings were particularly interested, and our dinner conversations were more likely to be about the Pittsburgh Pirates and our baseball card collections than about American politics.

During that summer I successfully begged my parents to allow me to visit neighbors, friends, and relatives who had better antennas so that I could watch the conventions. The coverage was extensive, both inside and outside the convention centers, especially in Chicago. My friends kept interrupting my focus, asking me to play games. What gives? I failed to understand their lack of interest.

I initially chose George Wallace as my candidate, not because I supported his segregationist views (I didn’t even know what they were), but because I thought it was exciting to have a bona fide third party candidate. He would go on to win five southern states; it would be more than 50 years before a third party candidate once again carried any states (still waiting, that is). When I realized in early November that he could not win, I changed my allegiance to Richard Nixon, not because I thought he had a secret plan to get us out of Vietnam, but because I thought he looked more presidential than Hubert Humphrey (I didn’t even realize that my parents were Democrats). When I switched my hand-printed signs from Wallace to Nixon as the election approached, I almost lost my best friend, for he had simultaneously switched from Wallace to Humphrey. Whatever was he thinking?

I was deeply disappointed in 1972 when most of the political intrigue disappeared (the Thomas Eagleton story was short-lived). This time I had convinced my parents that we needed a weekly news magazine. I was honored, as a 15-year-old, when my mother asked me for advice on how she should vote in the Democratic primary. Unfortunately, I still knew nothing about the issues. Instead, I gave her a very long and detailed response about who had won every state, the percentages of the vote, and the delegate count. She said something about “too much information.”

Never again would I experience the awe of an 11-year-old, discovering democracy in America. Following 1968, I had to wait 32 years for comparable levels of intrigue, when we weren’t sure who had carried Florida, and hence the election. Then there was the excitement of 2016, when the news commentators had it all wrong. 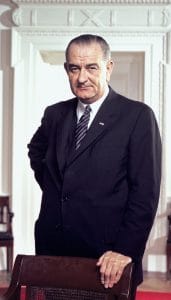 I guess I shouldn’t be embarrassed (given that I was only 11) for choosing Richard Nixon only because I thought he looked more presidential. Nevertheless, I find myself wondering how often voters choose their candidate for peripheral reasons. I really had no other choice then, given that the media primarily fed us sound bites, and my family members were not particularly interested.

There was significant dissatisfaction with the candidate choices in 2016. Indeed, we hear rumblings about possible third-party candidates in 2020. Maybe it’s time for a bona fide third-party run. Maybe we need a bipartisan ticket to help us think through the details and decide on the basis of the issues. Certainly, we need to give our kids more substance to think through the strengths and challenges of various arguments and positions. Who knows which 11-year-old boys and girls of today will be writing the editorials in the decades ahead?