On the night of Sunday, March 31, 1968, Lyndon Baines Johnson began one of the most famous addresses of his long career.

“Good evening, my fellow Americans: Tonight I want to speak to you of peace in Vietnam and Southeast Asia.” LBJ announced that a small contingent of reinforcements were being sent to Vietnam, and that American bombers would no longer target the area north of the 20th parallel in Vietnam, which contained 90% of the North Vietnamese population.

But then came this shocker: Johnson declared his unequivocal withdrawal from the 1968 presidential race: “I shall not seek, and I will not accept, the nomination of my party for another term as your president.”

Johnson’s “Withdrawal Speech” came in the wake of one of the great crisis periods in American history: the Tet Offensive. During the Vietnamese celebration of the lunar new year, or Tet (January 30), the Vietcong and the People’s Army of (North) Vietnam launched a massive surprise offensive throughout most of the South. Though technically a tactical victory for the anti-communist forces, there was a sense both domestically and internationally that the United States had lost.

As historian Robert Dallek writes, “[t]he principal casualty of the Tet offensive was U.S. public opinion,” and indeed, public opinion polls revealed that LBJ suffered a massive drop in popularity. Unfortunately for Johnson, the situation only worsened when, during a national broadcast on February 27, CBS’s Walter Cronkite, the “most trusted man in America,” gave his views on the war, concluding that “we are mired in stalemate.” LBJ also faced pressure from within the government, as doves in both Congress and the Pentagon urged disengagement.

Given the intelligence failures that resulted in the strategic surprise of the Tet Offensive, and the continued flow of optimistic reports from the military, the pressure on the administration to solve the Vietnam problem kept mounting. Concerns regarding the military situation were heightened by General Westmoreland’s sudden request for additional troops, which soon exceeded the congressionally approved ceiling by 180,000. In his first significant questioning of extant policy, incoming Secretary of Defense Clark Clifford expressed his frustration with the situation: “there is a very strange contradiction in what we are saying and doing. … We should give some very serious thought to how we explain saying on one hand the enemy did not take a victory and yet we are in need of many more troops and possibly an emergency call up.” Per Walt Rostow’s suggestion, the president assigned Clifford to lead a group in studying the question. Johnson also allowed former Secretary of State Dean Acheson to conduct his own investigation.

Johnson continued vacillating as he received pessimistic reports from both Clifford and Acheson. While LBJ considered different options for beginning the peace process, he encountered a series of domestic political challenges which pushed him closer to disengagement in Vietnam. On March 13, Senator Eugene McCarthy won 41.9% of the vote in the New Hampshire primary, which put the president on notice: the American people were displeased with him. McCarthy’s success prompted longtime LJB rival, Robert F. Kennedy, to enter the race on March 16, despite his previous statements to the contrary. 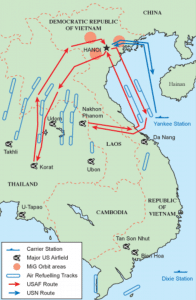 On March 23, Johnson responded positively to speechwriter Harry McPherson’s recommendation of unilaterally halting bombing north of the 20th parallel and demanding the cessation of North Vietnamese supply lines along the Ho Chi Minh Trail as a condition for beginning negotiations. Additionally, at Clifford’s suggestion, Johnson invited the “Wise Men”—ex- and non-administration advisors—to give him their views on the war. The last time that the Wise Men had met (November 1967), they overwhelmingly supported Johnson’s Vietnam policy, encouraging him to keep pressuring the North Vietnamese. Having been briefed the night before, the Wise Men met with Johnson on March 26, and expressed their (generally) now-pessimistic views. Johnson seemingly remained undecided until the last few days before the speech. On March 28, his advisors met to discuss the speech, which they decided needed to be “about peace.” They wrote a “peace” draft, which Johnson accepted. On March 31, Johnson delivered his address. Four days later, the North Vietnamese government agreed to preliminary talks; for a variety of reasons, full talks would not begin until November.

First, Johnson acted in what he deemed to be the best interest of the country. He reluctantly realized—perhaps too late—that Vietnam was a losing fight, and sought to rectify the situation. Second, Johnson acted carefully, so as to polish his historical reputation. Johnson’s care in this regard is clearly demonstrated by the facts that he (1) allowed a great deal of debate over Vietnam policy in February and March 1968, and (2) took so long to come to a decision; he did not wish to make a snap judgment and endanger the lives of his soldiers, nor did he wish to leave South Vietnam at the North’s mercy. Unfortunately, he was unable to end the war.

Benjamin V. Allison is an incoming History PhD student at the University of Texas at Austin. He graduated from Grove City College with a BA in 2018, and from Kent State University with an MA in 2020. He specializes in the history of US foreign and national security policy, especially with regard to the Middle East and Russia. His master’s thesis and future dissertation examine US policy toward the radical Arab states during the Carter and Reagan administrations. Learn more at www.benjaminvallison.com.