Why Not Thank God? Andrew Cuomo and COVID-19

As for Cuomo, I noted that few Americans have battled the virus quite like the governor of New York, a state under siege. I noted that I feel for him. I also said that I wish he would fight to stop the loss of innocent life from abortion. He has done just the opposite. In January 2019, a year before COVID-19 swept New York, Cuomo and a jubilant group of New York progressives enacted an awful piece of abortion legislation, which they celebrated by illuminating the state’s monuments in pink.

Now, as Cuomo struggles to save the lives of New Yorkers, I hoped he might gain an altogether new respect for the sanctity and dignity of human life at all stages, from the womb to the tomb. He betrays the face of a wounded man—whose own brother fought the virus. Could his suffering provide a deeper sense of empathy? I applied that sentiment to the other governors as well.

I got a good deal of email on that article, much of it understandably critical for what some deemed excessive charity to Cuomo and the other governors. 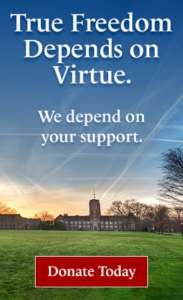 Nonetheless, with Cuomo looking like a man bearing the weight of the cross like few others in the Lenten season, I figured I’d extend an olive branch to a self-described Christian brother.

Well, alas, on April 13, Cuomo delivered a statement that hit me square in the gut. In his press conference that day on the COVID-19 pandemic, his first with real signs of hopes in New York, coming on the heels of Easter Sunday, Cuomo asserted: “The number is down because we brought the number down. God did not do that. Fate did not do that. Destiny did not do that. A lot of pain and suffering did that.”

Look again at that statement: “God did not do that.”

Cuomo offered that assessment on Easter Monday, right after greeting everyone in the room by acknowledging Easter Sunday and Passover, and heralding the good news that New York had at last flattened the curve precisely that weekend: “Here’s the good news: the curve continues to flatten…. We appear to have a plateau.”

And yet, Cuomo paused to assert that “God did not do that.” Not only does such a statement seem remarkably ungrateful but remarkably unnecessary. Consider: In the deeper workings of the universe, of Providence, of the unknown, might a benevolent God have had a role? Or, at the least, why directly begrudge God any credit? Why even say that? No reporter asked Cuomo such a question. No one brought it up, except for Andrew Cuomo.

Given that Cuomo raised the issue, I must ask: Governor, how do you know that? You don’t know, I don’t know, only the Almighty knows. As a self-described professing Christian, you do place faith in the omnipotence of God, one assumes. Why even assert this? Why go there?

Worse, do you know how many people in New York and around the nation and world have been in prayer, pleading God’s intervention? How many victims begged God for mercy and believe they were saved? Is Cuomo aware of the prayer chains, Sunday services, and literally only Lord knows what else, from pious Christians praying for his state?

Maybe this is too personal and shouldn’t be put it in writing, but I literally pray every day for the people of New York and COVID-19 sufferers everywhere. I often awake at 3:00 a.m. and pray for these complete strangers. My family doesn’t say grace without a plea to end this pandemic. I’m far from alone. Believers do such things during times of crisis, especially when one feels helpless with little other recourse.

Dear Gov. Cuomo, there are healthcare officials getting through this precisely because of their faith. For many people, it takes a supernatural reach to cope with a tragedy like this. Ronald Reagan had a favorite quote from Abraham Lincoln: “I’m often driven to my knees by the overwhelming conviction that I have nowhere else to go.”

How many New Yorkers and people around the country have been on their knees?

At a yet deeper level, Cuomo’s comments are still more disturbing. Consider: What would possess a man to even pause to claim such a thing? The assertion is gratuitous, seemingly almost bitter, most definitely arrogant. Why is he not humbled?

You would think that Andrew Cuomo, above all, would be grateful. Especially, or at least in part, to the possibility of God’s mercy.