When a Teacher Becomes a Friend: A Tribute to My Teacher, Mr. Ted Walters

Biography When a Teacher Becomes a Friend: A Tribute to My Teacher, Mr. Ted Walters

In October 2013, I recounted the apparently miraculous way in which I located the one person in the world I was searching for – my seventh and eighth grade English teacher, Mr. Ted Walters, whose contribution to my intellectual development was invaluable and unsurpassed.

Having found Mr. Walters, the next step was to arrange for a reunion. We hadn’t spoken since I was his pupil 50 years earlier, and so there was a lot to catch up on. After exchanging several happy emails, during which I had to get used to addressing my old master (as teachers were called in our English-model private school) as “Ted,” we arranged to meet on Dec. 21, 2013.

When we opened the front door of the restaurant that served as our point of rendezvous, Ted and Pat were facing us. I recognized him immediately. The passage of nearly five decades since I had last seen him had not changed him much. I felt immediately at home with him.

There was one other particularly special moment during that reunion. Shortly after we sat down, Mr. Walters cocked his head to the right. The effect on me was electric. I had completely forgotten about that distinctive mannerism of his—a sign that let us know when he was fully “locked in” on us. Once he did it, the previous half-century separating past from present instantly evaporated, as if those years had never happened.

I spent two memorable hours with my old teacher that day. What a joy to start learning about his life, from his childhood as the youngest of 14 kids to his quiet, book-filled retirement. The really good news is that this was not a one-off meeting – not one of those “Hi, Bye, it was nice knowing you” deals. Instead, we stayed connected and a true friendship blossomed.

Ted and I spoke by phone once or twice a year, and there were several visits to see him and Pat at their home in Uniontown, Pennsylvania. Ted would have liked to come to our house, but his mobility was quite restricted those last years, and negotiating our home’s steps just wasn’t a viable option.

Ted’s life epitomized the American story in so many ways. Born Theodore Roman Pietkievicz, the son of Polish immigrant Walter Pietkievicz, he lived the American melting pot ideal and followed several of his seven older brothers in adapting their father’s first name to the less-foreign-sounding surname of Walters, becoming Ted Walters. Born in 1932, Ted was too young to join his seven brothers (yes, seven) in military service during World War II, but that didn’t stop him from serving overseas with the U.S. Navy during the Korean War. Ted loved his country.

In another oh-so-American storyline, Ted married his college sweetheart from nearby Waynesburg College, Pat Beaumont. The two were married for 62 years. It was a true love story. They formed a beautiful unit with two distinctly individual personalities blending harmoniously. Together they raised two sons, and the apple of their eye in their senior years has been their granddaughter, Ashley.

One of my visits to Ted was on the Saturday before my 50th class reunion at Cranbrook, where Ted had been my master. I took this photo of him that day, eliciting a laugh by making a bad joke: 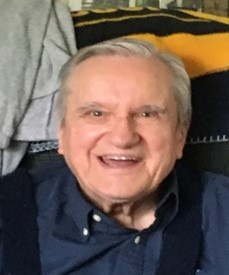 Although a quiet, modest man, you can see that Ted’s soul is joyful. His appreciation of the simple things of life was profound.

The last time I saw Ted was on George Washington’s birthday, 2020 –just a few weeks before COVID disrupted so much. The reason for visiting in February instead of waiting for nicer weather was so that we could go to the cinema together to see the remake of Jack London’s “The Call of the Wild.” That story had a special significance for both of us: It was the first novel that Ted taught to seventh graders at Cranbrook, and it was the first of about a dozen novels I would study under his tutelage. Alas, the insipid, politically correct rewrite of London’s novel was a travesty, but it was still a wonderful privilege for teacher and pupil to be able to critique the movie together. We enjoyed the occasion (see photo): 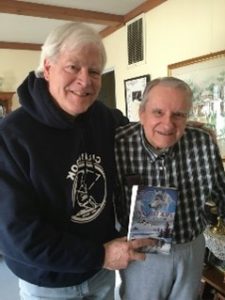 It turns out that our movie outing was the last time Ted went out for anything other than multiple doctor visits until he passed this August 26. I’m so glad that I saw him when I could. We talked two or three times after the movie, and he was always sharp as a tack. In fact, Pat told me that even the day before his passing, Ted and his family had a “fun time” in the hospital. And then he was gone.

Gone, but never forgotten. Several of my classmates have responded to the email I sent them announcing Ted’s passing: “I remember him fondly,” or “I thoroughly enjoyed his dry humor and kindness” – you get the idea. He was a beloved teacher in addition to being a loving husband, father, and grandfather; a true-blue patriotic American who loved and lived all that is good about this country; a worthy representative of the shrinking contingent of Korean War veterans; and, as I can testify, a great friend.

Finally, Ted, who kept his religious beliefs private, never talked the talk of Christianity, but invariably he walked that straight and narrow walk. What a good, good man. RIP, dear one.