The Summer of ‘76: Ronald Reagan and Karol Wojtyla — Two Freedom Fighters in America

Cardinal Karol Wojtyła arrived in the United States for a six-week visit in the summer of 1976. The Polish cardinal came to America that bicentennial summer for a festive celebration of intimacy with Jesus: the Church’s Forty-First International Eucharistic Congress. It was held in Philadelphia, where the Continental Congress had declared independence two hundred years earlier. He traveled throughout the United States, visiting cities big and small. He began his trek in Boston, home of revolutionary patriots.

The Eucharistic Congress ran August 1–8. The huge event included a little-known nun named Mother Teresa, whom Wojtyła had met only recently. Wojtyła and Mother Teresa were overshadowed by the presence of names better known at the time: Dorothy Day, Cardinal John Krol and even President Gerald Ford, who attended Mass in the city’s Municipal (JFK) Stadium on August 3.

Wojtyła spoke at that Mass, which was dedicated to “The Eucharist and Man’s Hunger for Freedom.” The cardinal’s speech might as well have had the same title. He gave a powerful statement expressing not just the goodness of the Body of Christ but also his sense of the forces of evil threatening the world — the forces aligned against freedom, the freedom that man wanted and that God wanted for man. The cardinal from communist-occupied Poland was very much aware that he was speaking in a country that just a month earlier had celebrated the two hundredth anniversary of its own triumph of freedom.

The Spirit of the Lord is upon me, because he has anointed me; he has sent me to announce good news to the poor, to proclaim release for prisoners, and recovery of sight for the blind; to let the broken victims go free.

These, said the cardinal, were the words of a thirty-year-old Christ as He arose in the synagogue of Nazareth facing His fellow countrymen officially for the first time. By those words, He revealed His messianic mission. That same Christ, said Wojtyła, “today faces us all, the People of the New Covenant, here on American soil, in Philadelphia, the City of Brotherly Love.”

The future pontiff then addressed the “hunger of the human soul, which is no less than the hunger for real freedom.” Each of us to some extent knows what this freedom is, said Wojtyła. “It is the principal trait of humanity and the source of human dignity.” He quoted from the Second Vatican Council’s Pastoral Constitution on the Church in the Modern World. That document affirmed that “authentic freedom” is “an exceptional sign of the divine image within man” and that “man’s dignity demands that he act according to a conscious and free choice.” Wojtyła continued, sharing words that the Protestants who signed the Declaration of Independence in that city two hundred years earlier would have appreciated:

Freedom is at the same time offered to man and imposed upon him as a task. It is in the first place an attribute of the human person and in this sense it is a gift of the Creator and an endowment of human nature. For this reason it is also the lawful right of man; man has a right to freedom, to self-determination, to the choice of his life career, to acting according to his own convictions. Freedom has been given to man by his Creator in order to be used, and to be used well.

Thus, God is the antithesis of the earthly destroyers of freedom — men like the totalitarians in Moscow and other communist capitals. As Fulton Sheen wrote in Peace of Soul, “God refuses to be a totalitarian dictator in order to abolish evil by destroying human freedom.”

A Hunger for Freedom

Of course, Cardinal Wojtyła said, we know perfectly well that man abuses liberty. Man can do wrong because he is free.

That is the risk.

That is also the beauty of freedom. As Wojtyła noted, the Creator has given man freedom not so that he will commit evil but so he will do good: “Freedom has been given to man in order to love, to love true good.”

This was an view of freedom that Pope John Paul II would underscore again and again. The concept would be central to some of John Paul’s greatest encyclicals, including Veritatis Splendor (The Splendor of Truth) and Fides et Ratio (Faith and Reason).

Expressing an idea that Ronald Reagan often communicated, Wojtyła said that there is a universal aspiration for freedom:

Americans had gained that freedom, said Wojtyła, whereas Poles had lost theirs. It was time for freedom to reassert itself. Now Poland needed help for its own independence — from the clutches of godless communism.

Would an American leader step forward to assist in that cause?

God and Reagan in Kansas City

As Karol Wojtyła toured America, his future partner in the crusade against communism was crisscrossing the country as well. Ronald Reagan was campaigning for the Republican presidential nomination in 1976. In that endeavor, Reagan boldly challenged the sitting Republican president. It was an audacious move, but Reagan felt he had no choice. Gerald Ford’s presidency had been disappointing in many ways, not least in his embrace of détente.

The previous summer, President Ford had mistreated Aleksandr Solzhenitsyn during the great Soviet dissident’s much-anticipated visit to America. Ford snubbed Solzhenitsyn because he did not want to anger Soviet authorities.

Solzhenitsyn had been in Washington to speak to the AFL-CIO, just down the street from the White House. It was a perfect time for Ford to meet with him. Conservatives, from Republicans like Reagan, Jack Kemp and Jesse Helms to anticommunist Democrats like Scoop Jackson, urged the president. Ford refused. He was backed by his right-hand man in foreign policy, Henry Kissinger. The Ford administration dared not offend Leonid Brezhnev’s regime by shaking hands with the Kremlin’s enemy. Worse, as historian Douglas Brinkley recorded, Ford privately called Solzhenitsyn “a godd*mn horse’s a**.”

For Reagan, Ford’s humiliation of Solzhenitsyn was one of the last straws. He was so rankled that he decided to challenge Ford. Like Karol Wojtyła, Reagan wanted America to take the lead in the fight for freedom. If only Americans would seize that role with the right leadership, they could win the Cold War, and the Soviets could lose.

Reagan wanted to provide that leadership. And so he went to the Republican National Convention in Kansas City with an unlikely upset victory in mind. How close did he come to pulling it off?

The Letter to the Future

At the last minute, a number of key states at the convention moved into Reagan’s column and nearly allowed the former governor to overtake Ford. In the dramatic showdown at Kansas City’s Kemper Arena on August 19, Reagan missed the nomination by a little over a hundred votes. He grabbed 47.4 percent of delegates in an 1,187–1,070 contest.

Ford let out a huge sigh of relief.

Once the final ballots were in, a gracious Ford waved to Reagan and Nancy in their box in the arena. With all the TV cameras fixed on the Reagans, before a national audience of tens of millions, Ford invited them to the main stage, as the GOP faithful shouted: “Ron! Ron! Ron! … Speech! Speech! Speech!” “Ron, will you come down and bring Nancy?” pleaded Ford. A reluctant Reagan relented, telling Nancy as they were whisked through backstage corridors, “I haven’t the foggiest idea what I’m going to say.”

Well, Reagan figured out what to say. He proceeded to give, extemporaneously, one of the finest, most memorable speeches of his life.

“If I could just take a moment,” Reagan began. Then dove in with gusto:

I had an assignment the other day. Someone asked me to write a letter for a time capsule that is going to be opened in Los Angeles a hundred years from now, on our tercentennial. It sounded like an easy assignment. They suggested I write something about the problems and issues of the day and I set out to do so, riding down the coast in an automobile looking at the blue Pacific out on one side and the Santa Ynez mountains on the other, and I couldn’t help but wonder if it was going to be that beautiful a hundred years from now as it was on that summer day. And then, as I tried to write. …

Here Reagan paused, asking his audience to turn their minds to the same task: what would each of them write “for people a hundred years from now who know all about us? We know nothing about them. We don’t know what kind of a world they’ll be living in.”

Reagan then gave his response to the assignment, which related to nuclear war and a civilized world:

We live in a world in which the great powers have poised and aimed at each other horrible missiles of destruction, that can, in a matter of minutes, arrive in each other’s country and destroy virtually the civilized world we live in. And suddenly it dawned on me. Those who would read this letter a hundred years from now will know whether those missiles were fired. They will know whether we met our challenge. Whether they have the freedoms that we have known up until now will depend on what we do here.”

Will they look back with appreciation and say, “Thank God for those people in 1976 who headed off that loss of freedom, who kept our world from nuclear destruction” ? … This is our challenge.

“There’s a Reason for This”

Everyone in the room was locked in, completely silent. “The power of the speech was extraordinary,” said Edmund Morris. “And you could just feel throughout the auditorium the palpable sense among the delegates that [they had] nominated the wrong guy.” 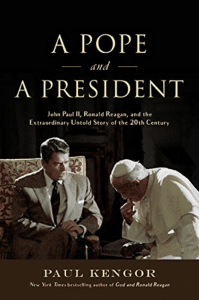 Read the new book: “A Pope and a President: John Paul II, Ronald Reagan, and the Extraordinary Untold Story of the 20th Century.”

They had indeed. Gerald Ford, their nominee, went on to lose the presidency to Jimmy Carter.

The conventional wisdom was that four years later, in 1980, Reagan would be too old for the presidency. Going down in ’76, he was down for good.

The loss was traumatic for everyone, except Ronald Reagan. His daughter, Maureen, cried for days. She later recalled that each time her father saw her he would ask, “Are you still crying?” Finally, Reagan pulled his daughter aside and shared his calming “God-has-a-plan” theology. “There’s a reason for this,” he told Maureen. “Everything happens for a reason. … If you just keep doing what you’re doing, the path is going to open up.”

For Ronald Reagan, as for Karol Wojtyła, there was a reason: a shared sense that God had a plan for him in the world and the course of history.

It was a course that within just a few short years was about to change dramatically. The world would face a new president in the White House and a new pope at the Vatican.