Spending More on Debt than Defense

The financial health of the federal government has been deteriorating for decades. Unable to break free from our bipartisan addiction to deficit spending, the national debt has continued to rise relentlessly. This has brought us within sight of a grim milestone: the day when the interest that Americans have to pay on the national debt exceeds what we pay for national defense. According to The Wall Street Journal article, “U.S. on a Course to Spend More on Debt Than Defense,” we will reach that baleful milestone in only five years.

The figures are startling. In 2023, military spending is projected to be more than $700 billion. Yet in that same year the annual interest that taxpayers will pay on the national debt will be even higher.

You can argue that the federal government spends too much on defense. That is an unknowable except in retrospect, but the cost of spending too much on defense is almost certainly less than the cost of not spending enough. Whatever you think about defense spending, at least it is for present consumption. By contrast, interest on the national debt is for past consumption – over $27 trillion worth by 2023. That is how much young taxpayers will have to pay to service the debt run up by their elders.

The fundamental problem with blaming Uncle Sam’s sorry fiscal state on defense is that, unlike those myriad other federal programs that have contributed to the national debt, defense spending is one of the few activities that Uncle Sam engages in that is explicitly authorized by the U.S. Constitution. For well over a century now, animated by the belief that the federal government should provide economic assistance to Americans, progressives have pushed for government to expand into areas of life never envisioned by the founders nor authorized by amendments to the Constitution. It is no wonder that progressives attacked Justice Kavanaugh from the moment he was nominated. They fear and despise his respect for the text of the Constitution, because they want to spend more money on things not stipulated in the Constitution and less on what is stipulated in the Constitution.

Indeed, the progressive agenda of expanding government beyond its historical, constitutional confines has been hugely successful. Defense spending as a share of the federal budget has fallen from an average of 48.1% from 1792 to 1860 to under 25% today. [See chart, courtesy of The Heritage Foundation.] 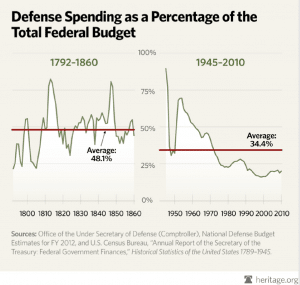 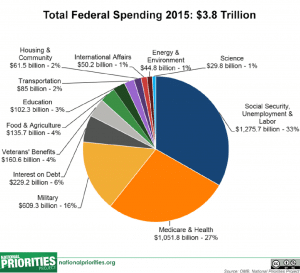 The federal government is in uncharted waters, financially speaking. Historically, the federal government incurred significant debt only in wartime and then whittled away at that debt during peacetime. In the modern era, when federal spending expanded into new areas, the national debt has swollen rather than shrunk during peacetime. The fiscal problem, then, is not due to military spending, but to other spending.

Sooner or later, something will have to give. We eventually will have to learn to live within our means. I don’t say that as a matter of opinion, but as a law of nature. It simply isn’t possible to live beyond one’s means indefinitely. The longer it takes for us to learn that lesson, the more painful the convulsions of a future debt crackup will be.