Review of Mark Levin's "Unfreedom of the Press"

Media & Culture Review of Mark Levin’s “Unfreedom of the Press”

The opening words of the Bill of Rights, i.e., the First Amendment to the U.S. Constitution, spell out these freedoms: “Congress shall make no law respecting an establishment of religion, or prohibiting the free exercise thereof; or abridging the freedom of speech, or of the press….”

And yet, those threats wouldn’t have the strength they have if a free press wielded its freedom properly, fairly, apolitically, and non-ideologically. Unfortunately, America has a dominant press that for decades has freely acted as an arm and agent of the Democratic Party and of liberalism. What the press reports—and, equally important, what it fails to report and willfully omits—shapes America, its politics, its culture, and does so dutifully according to the Democratic Party’s ongoing and evolving ideological agenda. Make no mistake: so many of today’s “news sources,” from CBS and CNN to the Washington Post and New York Times, primarily serve as propaganda organs for Democrats. With occasional exceptions, they toe the party line. This has been true for a long time, and it constituted a near-monopoly until the advent of Fox News, talk-radio, and web technology that has opened other avenues, even as the “mainstream media” remains dominated by left-wing sources.

The fact that this mess exists, and has long been the case, is the subject of Mark Levin’s latest book, Unfreedom of the Press, which has rapidly become Levin’s biggest seller—which itself is telling.

It must be stated here from the outset that Mark Levin’s books stand out among books by major media personalities. Many pundits, particularly in talk-radio, bang out books written by ghostwriters. I’ll always remember a moment with a well-known media figure who asked me in the TV studio to sign a copy of one of my books. “How much of that did you write?” he asked. A little stunned, I said, “Well, all of it.” He replied that he didn’t write a word of his recent bestseller. Sadly, that’s not unusual. Mark Levin is the complete opposite. He does his own writing and research, and his books are testimony to his considerable knowledge and mind. Unfreedom of the Press is the latest case in point. The writing is cogent, the research is exceptional, as is the marshalling of facts in support of his arguments. 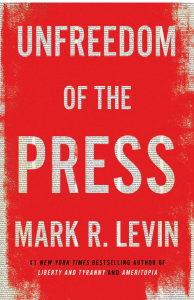 “Unfreedom of the Press is about how those entrusted with news reporting in the modern media are destroying freedom of the press from within,” Levin begins, underscoring a theme of his book, namely: the liberal press consistently undermines its own credibility. He notes that the problem isn’t one of government oppression or suppression, but the dominant media’s political and social activism, its “progressive group-think, Democratic Party partisanship, opinion and propaganda passed off as news, the staging of pseudo-events, self-censorship, bias by omission, and outright falsehoods,” too often substituted for “old-fashioned, objective fact gathering and news reporting.”

Levin gives countless examples, and I could as well, where liberal reporters and editors come up with endless reasons not to report something damaging to a liberal or the liberal cause but then do little to no serious fact-checking to rush out the flimsiest claims about a conservative or the conservative cause. The common assertion from liberals that news organizations first and foremost care about headlines and selling newspapers is hogwash. It’s not about dollars but the cause. If the story hurts liberalism, they’ll do backflips to not report it, and at least not report the story more than once. (A common tactic I’ve experienced: liberal reporters will claim they don’t need to write a follow-up story because newspaper X already did the story, as if the story is now forever closed. To the contrary, if the story is against a Republican politician, then the opening salvo by newspaper X is a signal to the entirety of the remainder of the liberal media to open the floodgates.)

“This book could easily have been ten times its current length,” writes Levin. That’s no exaggeration. And unfortunately, adequately summarizing the book here could require ten times the length of this review. Chapter three alone is worth the pricetag. Titled, “The Modern Democratic-Party Press,” an apt description coined by Levin, the long list of bulleted examples of the media’s trashing of Donald Trump runs seven pages long. Even if you detest Donald Trump, you’ll agree that the vicious hyperbole towards the man laid out here is a remarkable collection. That’s a contemporary example of outrageous media bias. The chapter that follows, titled, “The Real Threat to Press Freedom,” chronicles real abuses of presidential power against the media—not by President Trump but by presidents like Woodrow Wilson and FDR. These are abuses that make Trump look like a lefty journalism professor by comparison, and they are abuses that progressives through the ages have kept assiduously silent about. 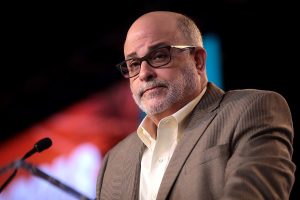 Throughout this book, FDR rears his head. Chapter six, titled, “The New York Times Betrays Millions,” is an indictment of Franklin Roosevelt toward the plight of Jews in the Nazi era as well as the Times for its terrible coverage of the Holocaust. Levin quotes Dr. David S. Wyman: “It seems almost unbelievable that in Roosevelt’s press conferences (normally held once a week) not one word was spoken about the mass killing of European Jews until almost a year later.”

It does indeed, but if you know about FDR’s ugly record toward Jews and Israel, this will not surprise. Levin quotes Emory University professor Deborah Lipstadt on how FDR and his administration (in Levin’s words) “whitewashed or deemphasized the Nazi eradication of Jews,” particularly FDR’s Office of War Information (which was likewise lousy on the Soviet threat). Lipstadt cites the 1943 Moscow declaration by FDR, Churchill, and Stalin, which denounced almost every wartime human-rights atrocity except for those against Jews. “Nowhere in the declaration were the Jews even obliquely mentioned,” Lipstadt noted, “a phenomenon the press simply ignored.”

The same press that served as sycophants to FDR. Here again, the press had the freedom to cover the story otherwise, but instead it followed the lead of the Democrat president. Yet again, “journalists” marched in lockstep with their party leader.

Dedicated listeners to Mark Levin’s radio show have heard him speak about the New York Times’ tragic failures on the Holocaust. What they likely haven’t heard about is the Times’ likewise awful coverage of Holodomor—Stalin’s forced famine in the Ukraine, where 5-10 million men, women, and children starved to death in the early 1930s.

To that end, Levin spends considerable time on the infamous work of Times’ journalist

Walter Duranty, who would (unforgivably) be awarded the Pulitzer Prize, despite his woefully misleading and inaccurate reporting on the Ukraine. Duranty would report, including in articles with titles like, “Russians Hungry, but Not Starving” (March 31, 1933, New York Times), that: “here are the facts…. There is no actual starvation or deaths from starvation, but there is widespread mortality from diseases due to malnutrition…. These conditions are bad, but there is no famine.”

This was not simply erroneous reporting. Levin recounts what scholars of this period and colleagues said of Duranty, namely: he knew otherwise. Duranty told William Strang at the British embassy on September 26, 1933 that as many as 10 million people had already died. He also personally told Eugene Lyons (UPI’s Moscow correspondent, who would become a leading ex-communist, particularly via his memoir The Red Decade) that he estimated the total number of famine victims around seven million. Malcolm Muggeridge (another onetime leftist reporter who would become a leading anti-communist) would later call Duranty “the greatest liar of any journalist I have met in fifty years of journalism.” Even the esteemed man of the left, Joseph Alsop, would denounce Duranty as a “fashionable prostitute” in service of communists.

As Levin shows, the Kremlin wined and dined Duranty, who licked it all up. Not only did the Soviets lavish him with food and booze (as Ukrainians tried to eat grass), but with a chauffeured car, assistants, and a handy cook-secretary-turned-mistress named Katya, who put her full self at the disposal of the Times’ feted “Man in Moscow.” She bore Duranty a son in the process. Eugene Lyons suspected that Duranty was flatly on the Kremlin’s payroll; at the least, he was a recipient of the Bolsheviks’ generous subsidies.

For Walter Duranty, apparently the perks were too good to give up for inconvenient facts on trifling things like the mass starvation of millions at the hands of the dictator that FDR lovingly dubbed “Uncle Joe.”

Speaking of which, FDR tapped Duranty for advice on whether or not the Democrat president should do what every previous president from Woodrow Wilson to Herbert Hoover had refused: extend diplomatic recognition to Stalin’s totalitarian slave state. FDR did just that. When recognition was granted, Duranty traveled with his pal, Stalin henchman and foreign minister, Maxim Litvinov, to FDR’s jubilant signing ceremony. As Levin notes (citing Douglas McCollam), at a banquet at the Waldorf-Astoria in New York to celebrate the event, Duranty was introduced as “one of the great foreign correspondents of modern times,” as 1,500 dignitaries leapt to their feet in a standing ovation.

Not only had Duranty not paid a price for his shameful misreporting and disinformation, but he was a journalistic celebrity, loved by the likes of stalwart pro-Soviet dupes such as George Bernard Shaw and Sinclair Lewis.

Levin covers this excellently and concisely. All of his chapters follow that pattern, whether dealing with liberal-press vagaries of years gone by or newer instances of shameless media shenanigans to this day. Again, this review cannot due them all justice.

Mark Levin concludes his study of the media with some sober, measured advice. He pleads with reporters to try to muster some integrity in performing their duties, to not deceive the audience, to be transparent, to exercise humility, to not be partisan hacks. The problem, however, as Levin notes, is that “most partisans”—that’s indeed what many journalists are, with partisanship their driving impetus for entering the field of journalism—“are unable or unwilling to put aside their personal ideological and political perspectives or, even worse, they consider them essential to moving and improving society through activism.”

Precisely. They are activists first and foremost—for the political left and for the Democratic Party.

Does that leave us with much hope? Well, not really. But Levin’s candid diagnosis at least helps us understand what we’re dealing with. By knowing what the press is like, we can have a better sense how to respond. That includes creating alternative forms of media to communicate the truth, to circumvent the likes of the New York Times and the prevailing partisan press. It also includes publishing and reading crucial books like Unfreedom of the Press.