Last week USA Today reported on the reaction of officials at Yale Law School to speakers and students who believe in and advocate for religious liberty. Their reaction wasn’t pretty.

The initial provocation was the invitation by the Yale Federalist Society to a certain attorney — Kristen Waggoner — for a February lecture. Without knowing anything about this invitation, one might think it a giant “nothingburger.” Waggoner is an accomplished attorney who has won cases before several courts, including the U.S. Supreme Court last year. She works for an organization that, too, has had tremendous success, notching wins at the highest levels, including nine SCOTUS decisions over the past seven years. This is quite an impressive record for any attorney, especially one who might be an example to fellow female colleagues. One might think that law students and their faculty, who dedicate themselves to learning and teaching what legal success looks like, would value this kind of insight from this kind of lawyer.

You would be wrong. You see, the organization that Waggoner represents — the Alliance Defending Freedom — spends its time defending religious freedom, the sanctity of life, and traditional marriage and family. It believes that people of faith ought to be able to live out their faith in every area of life, whether that is in their businesses, in schools, or in the public sphere in general. The case that Waggoner won last year concerned a religiously inspired cake artist who asserted that he ought to be able to operate his business in accordance with his faith and his rights of self-expression. Waggoner won a 7-2 decision. Given ADF’s record before the court, its positions on these “hot-button” political issues are, by definition, mainstream in American life. Yale, however, didn’t see things that way.

Opposition to the Waggoner invitation was followed by a more serious petition. Students demanded that the law school refuse to allow students who benefit from several financial aid programs to work at organizations that have a religious mission. So, a Catholic adoption agency, or a Presbyterian group home, would not be able to benefit from a Yale law student’s expertise for a summer because they are motivated by religious considerations in executing their mission. Many think that this is active discrimination against religious students.

Contrast this activity with those of the institution for which I have the privilege of working. The day before the USA Today story ran, Waggoner was on the campus of Grove City College. She participated in a two-day conference on freedom of conscience sponsored by the college’s think-tank, the Institute for Faith & Freedom. The Institute asked twenty scholars, researchers, front-line practitioners, and communicators to address this fundamental American freedom that has served so many for so long.

Respected emeritus law professor John Sparks interviewed Waggoner before a packed lecture hall. She shared professional insights, personal struggles, and prospects for her work in the future. The hundreds of students, faculty, alumni, and friends who attended benefited from her experience, regardless of their own views of the subject. They expressed gratitude and respect by applauding at the end, and Waggoner willingly devoted extra time to answering individual questions afterwards. This was a genuine demonstration of civil discourse, open discussion, and learning.

I realize that an undergraduate faith-based college is a different animal than an Ivy League law school. They do different things, to be sure. But both institutions are preparing the next generation to be leaders. Both sets of students benefit from learning from those experienced in their chosen crafts. But in this case, Yale’s unyielding commitment to secular progressive ideology limits learning through civil discourse. That is a shame. 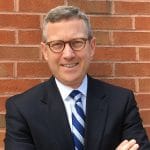 Jeffrey S. Trimbath is the Executive Director of the Institute for Faith and Freedom at Grove City College. Over the course of three decades, he has served in a number of policy, development and management positions in government and the nonprofit sector in both Washington DC, and his home state of Pennsylvania. He earned his Master of Divinity from Gordon-Conwell Theological Seminary and is an active member of his church.