NFL Retirees: A Bright Spot in a Sad Picture

How many times have you been asked: What do you do for a living? Your answer to that question divulges a great deal about you. Self-concept, self-worth and outlook are revealed by the impression you hope to communicate or strategy behind your response. We all quickly forecast how our answers will be perceived by others. This is especially true for individuals who are retiring or “calling it quits” in the National Football League (NFL). They have a decision to make in answering such a question: live in the past or boldly and positively look to and plan for the future.

Many retiring NFL players are apparently having a very difficult time post- football. These athletes are moving from the bright spotlight to trying to illuminate what they see as a dimly lit life. Why? Many retired players are answering this question by defining themselves in the past. Because the very essence of their identities is caught up in their professional careers, statistics, and achievements, they are unable to productively move into the next chapter of their lives. The future for these individuals is held hostage by this outlook. The Sports Illustrated article, “Broken Men and the NFL’s Broken System: Why Life After the Game Is So Difficult,” outlines how lost these players are as they try to re-define who they have been for as long as they can remember—football players. This article and others like it describe their loss of identity and purpose, which has resulted in rampant divorce, drug and alcohol abuse, family dysfunction, and financial problems and bankruptcy for many NFL retirees.

Julius Thomas, the All-Pro tight end most remembered for his acrobatic receptions of passes thrown by Denver Broncos quarterback Peyton Manning, is a shining example of how to transition out of the NFL. Thomas has retired from his noteworthy professional career and is determined to make sure his current identity is not defined by his career, the media, the fans, or living in accomplishments of the past. Thomas left behind the limelight and a nationally known identity to pursue his next calling. What is different about him that sets him apart from his NFL counterparts who have gone before him? Julius has displayed three crucial elements in discerning the direction of this major life change: a driving motivation to serve others, a commitment to candid and thoughtful personal self-assessment, and a faith and trust in God that provides boldness and forward thinking. All three have contributed to a humble and confident metamorphosis of vocational callings for Thomas. 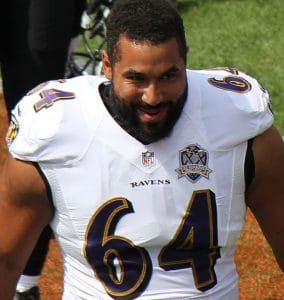 Read more by Dr. Thrasher: “The Double Life of an NFL Lineman”

Matt Dunn, writing in “What We Learn About Self Identity From Julius Thomas,” states that Thomas realized that “at a deeper level there was a longing for purpose found in helping others.” He plans on earning a doctorate degree in psychology to do further research on the effects of head injuries in contact sports, which cause brain trauma and changes in neurobehavior. He believes that he is to aid his retiring or retired NFL peers who might be affected by these conditions. Julius is committed to testimonials of service and moving beyond being recognized as a famous NFL receiver. Thomas describes it as a yearning and a heartfelt call to assist others. Devotion to serving is the motivating purpose in his life. This is contrasted with the cars, homes, toys, and all the accoutrements of the NFL “life.” As he reflected on his life, he realized that these things never did bring meaning to his deepest desires.

Upon his retirement, Julius wrote a reflective essay titled, “Journey Into Self,” in which he took time to “check in” with himself. He shared his thoughts by stating, “I took stock of where I was in life and what was important to me.” Thomas decided to move beyond the externals of life and look within. As he “peeled back the masks,” he accepted that his identity was not Julius the wide receiver. There were many facets of who he was that he was never vulnerable enough with himself to explore and then embrace. He studied Socrates, Aquinas, Eckhart Tolle, Brene Brown, George Mumford, David Hawkins, Dr. King, and the Scriptures. Through sincere self-assessment, he delved into his passions, interests, fears, relationships, and hopes, and contemplated what really brings meaning to life. Thomas moved confidently forward after football due to the role self-assessment played in deciphering his direction in this new chapter of life.

In “For Broncos’ Thomas, Faith Drives His Football,” Paul Klee states that Thomas had two playbooks while with the Broncos: the football playbook and his Bible. A verse important to him is 2 Timothy 1: 7, which reads “For God did not give us a spirit of timidity, but a spirit of power, of love and of self-discipline.” With the Lord’s help, Thomas believes that he can boldly step out of football knowing that his identity is not defined by the pigskin. He knows that he is a special creation in the Lord’s sight. Julius trusts God for his daily life and his future. Thomas is convinced that the Lord directs the heart and is confident that He will work through him to faithfully serve his peers in this new capacity and calling.

It is so easy to be defined by past achievements or one’s career, especially for professional athletes. In making a major shift in vocational calling, Julius Thomas has demonstrated a personal identity based in a commitment to service, true self-knowledge, and an unswerving trust in his Heavenly Father. He has discerningly and confidently transitioned from an illustrious NFL career to a calling of being devoted to bettering the lives of his NFL colleagues.

Dr. Jim Thrasher is the Senior Advisor to the Vice President for Student Recruitment and the coordinator of the Institute for Faith and Freedom working group on calling.