George Cahill was a man with a higher mission fixed to the skies.

He volunteered to fight in World War II at the earliest possible age: 17-and-a-half. Both parents signed off, and he headed to gunnery school in Las Vegas.

George met his crew in Lincoln, Nebraska. They flew to Newfoundland and then Iceland and England. And there, his mission would be a most daring one.

George flew on a B-17 with the Eighth Air Force. He was a togglier, a perilous position often alternately referred to as a “bombardier” or “nose-gunner” or “tailgunner,” though George was a stickler for the differences. The togglier sat inside the cramped “nosecone” of the plane and released the bombs.

Earl Tilford, my retired colleague from Grove City College, who himself served in the Air Force, and who had George speak to his classes, told me this about toggliers: “A B-17 togglier was responsible for arming and dropping the bombs in lieu of a bombardier…. The togglier had to flip a number of toggle switches to arm the bombs and activate the release mechanism and—above all—make sure your plane’s bombay doors were open, otherwise you’d blow yourself out of the sky. That happened on occasion.” 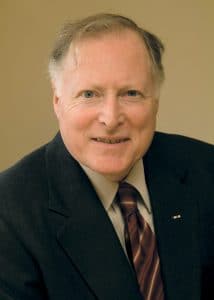 Over lunch one day in September 2015, I pushed George to describe what that was like. He wasn’t surrendering much. I got a few short sentences from him.

I asked George if he had “any close calls.” He shot me a shocked look, with another, “Oh, hell!”

This time, the “Oh, hell” meant “Oh, hell yes,” though he didn’t care to elaborate. There were, I pried out of him, “at least a dozen” close calls.

I later learned that on one occasion George’s “Flying Fortress” was so shot up with holes that his crew of 10 had to do an emergency landing in Wales with only one of four engines still operating. As the plane coasted into a landing, the final engine stopped. They barely made it. (Click here for a brief clip of George talking about this moment.)

That was what George faced.

For a visual, if you’ve seen the chaotic opening scene of the film Unbroken, about World War II bombardier and Olympian Louis Zamperini, that’s what George experienced.

But during our lunch, George wasn’t there to tell me about World War II. He had two other missions that day. First, he showed me around Flag Plaza in downtown Pittsburgh—his creation, pride, and joy. George was the founder and president of the National Flag Foundation, a terrific organization.

George was our flag-man at our American Founders luncheon events, held quarterly by the Center for Vision & Values at the Rivers Club in downtown Pittsburgh. After saying grace, we would do the Pledge of Allegiance, which George always led, but first with an extemporaneous explanation of something about the American Founders’ understanding of their new flag as representing a kind of New Constellation.

And that brings me to the former togglier’s primary mission that day in September 2015. George took me to lunch to toggle my attention, to zero-in on a project close to his heart: something called The New Constellation.

An admirer of flags since his Boy Scouts days, George explained to me that the arrangement of the stars of the new flag envisioned by the American Founders represented a kind of New Constellation altogether. There was a divine Author to the heavens, who had set the stars in place. The men of the Founders’ era learned to navigate by the stars. Their country would be navigated by both a natural law and divine law—or, as Jefferson put it in the Declaration, by “the laws of nature and nature’s God.”

Nate Mills, a GCC alumnus and emerging expert on the topic, puts it this way: “The Founders believed that by structuring a government inspired by the laws of nature and nature’s God they could look to the night sky as a metaphor for their experiment in federalism.” In the Flag Act of 1776, the flag implemented a design of 13 stars “representing a new constellation.” The Founders saw each colony as a fixed star, set and living in harmony with one another and not interfering in the spheres of any other state’s place in the celestial order. “In understanding their experiment in self-government in terms of astronomy,” says Mills, “the Founders appealed to a powerful set of metaphors to help explain to the world the unique synthesis of ideas that the United States of America represented.”

George loved this concept, and was anxious to convince the Center for Vision & Values to pick it up. He told me he was old and running out of time. It was the last best thing he wanted to do. Current and future generations needed to know. He wanted our group, the Center for Vision & Values at Grove City College, to study it. One of my best students, Nate Mills, now with National Review Institute, jumped on it. He did not disappoint. We thrilled George with Nate’s paper and presentation on the topic at our American Founders event in March 2017.

Nate’s work and ours isn’t finished. We will continue to carry this flag for George, whose time has indeed now passed.

George Cahill passed away on July 2, at the age of 92. This unflagging champion of America’s New Constellation now joins the shining light of the brightest and best of all constellations—no doubt a heavenly one.

We salute you, George.