The controversy over so-called “fake news” does not seem to be going away. However, the press’s frustration about it is increasingly misplaced. After the presidential election the media fixated for months on a handful of fictitious headlines from suspect websites that were shared around Facebook which allegedly affected the election. But they missed the bigger story about their own problematic reporting.

Take, as an example, the current fervor over President Donald Trump’s executive order temporarily halting immigration from seven Middle Eastern countries and reducing the number of total refugees to the United States. In one of its first articles about the executive order, CNN’s headline screamed: “134,000,000 People Banned from U.S.” Other press reports have suggested Trump’s order is illegal, unconstitutional, or un-American. 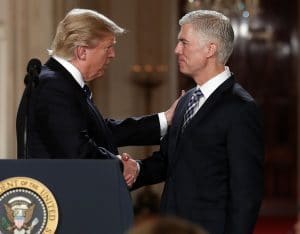 That’s a curious set of claims for an order that functionally resets the country’s refugee policy to what it was 18 months ago, under President Barack Obama. Was Obama’s refugee policy un-American and anti-Muslim?

The first myth is that Trump has banned Muslim immigration. Tell that to Muslims in Indonesia, Pakistan, and India, the three countries with the highest Muslim population, none of whom are affected by Trump’s order. Moreover, Trump has not actually banned immigration from any country. Rather, he’s put a 120-day halt on refugees entering the United States, a 90-day ban on immigration from seven specific countries, and an indefinite halt in refugees from Syria. If Trump wanted to ban Muslim immigration, there are an additional 46 Muslim-majority countries in the world that his order should apply to.

The second myth is that Trump’s order is unprecedented, or even illegal. That would be news to Congress, which in 2015 passed a new immigration law limiting immigration from four of the countries on Trump’s list, and to former President Obama, who halted all refugee immigration for six months from Iraq in 2011 for the same reason Trump is acting now: to install better security measures against terrorists posing as refugees to enter the country. For that matter, why did Trump pick seven specific countries to halt immigration from? Because he copied Obama, who in 2016 added Libya, Yemen, and Somalia to a list already including Iraq, Syria, Iran, and Sudan, as places where refugees should receive additional scrutiny. Why?  Because they are heavily affected by Islamic jihadist terrorist groups who have been known to pose as refugees to attempt to enter the United States and Europe.

The third myth is that Trump’s immigration order and goal of reducing refugee immigration is unprecedented. Tell that to President Obama, who made it almost impossible for Syrian refugees, Muslim or Christian, to immigrate to the United States until last year. That is to say, the Syrian civil war raged and Obama’s administration took in just 201 refugees from 2011-2014. The United States only began accepting significantly more refugees in 2015 and then dramatically expanded the number of Syrian refugees in 2016. Trump’s policy simply resets refugee levels to their 2015 standards.

The fourth myth is that it is illegal to use religion as a category in determining who should be granted refugee status. To the contrary, religious persecution is, under long-standing American and international law, one of the principle reasons to grant refugee status. That makes the outrage over Trump’s order more puzzling, given that under Obama, less than 1 percent of the Syrian refugees America took in were Christian, despite the fact that Christians made up 10 percent of the population of Syria and were specifically singled out for genocide. In a period of roughly five years of Obama’s presidency, between a half-million and million Syrian Christians fled religious persecution, and the United States accepted almost none of them. In 2016, when the United States accepted more Syrian refugees than in the five previous years combined, just 152 (0.8 percent) of the 17,671 refugees were Christian.

None of this means that Trump’s executive order was well planned or implemented. It appears to have been created haphazardly without sufficient input from or guidance to the agencies that are actually tasked with carrying it out. And while there is legitimate reason to scrutinize refugee applications more carefully, there is no justification for treating green-card holders the same way. Green-card holders are permanent U.S. residents who have already gone through extensive security screenings that can easily last a year or more. Moreover, while America has a legitimate interest in securing its borders, common courtesy suggests we should not grant refugees legal status to enter and then reject them at the border after a trans-Atlantic flight. This policy could have been announced with a 24-hour notice.

But the bigger story here is not President Trump’s policy, which, after all, differs from his immediate predecessor only mildly. The real story is how badly our professional story tellers in the media have botched the truth.

Dr. Verbois is an assistant professor of political science at Grove City College and an affiliated scholar at the John Jay Institute. He teaches American Politics and Political Theory and specializes in American constitutional thought.