Dropping in on the Veteran Down the Street

Biography Dropping in on the Veteran Down the Street

A few weeks ago, I dropped in on Russ Post, an 89-year-old war veteran who happens to live on my street. What followed was a memorable Saturday afternoon, as Russ took my teenage son and me on a roller coaster ride from his youth in Western Pennsylvania to the Pacific theater to Korea.

John Russell Post was born February 6, 1925, the product of a mother who lived to be 100 and father who lived to 106. Long before we got to his humble beginnings, Russ quickly started sharing stories about World War II. His bunkmate during the war was movie star Tyrone Power. Power kept a photo of his lovely, Hollywood-looks girl next to the bunk. When Russ impolitely gave the photo a good, long stare, the swashbuckling movie star reprimanded him: “I wish you’d quit ogling my wife!”

The two laughed it off and became good friends.

Of course, Russ’s time in the Marines was hardly about movie stars and pretty girls. He enlisted December 10, 1942. In short order, he was in Parris Island for basic training, with the vast Pacific his ultimate destination.

To adequately capture the highlights of what Russ experienced is impossible here, from his work supplying and evacuating troops from Iwo Jima and Okinawa to more. But perhaps most searing was what he witnessed at Saipan. There, in the summer of 1944, countless Japanese civilians killed themselves in mass suicides. Mothers hurled themselves and their babies into the sea rather than surrender. 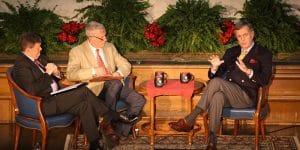 “I couldn’t believe my eyes,” says Russ. “Horrible. People were jumping off the cliffs, women holding their children. I don’t care how damned tough you are, that makes your head scream. Anyone who has witnessed anything like that … that’s about as close to hell as you can get.”

Russ estimates that they leapt 150-200 feet on to the jagged rocks and pounding water: “Not a word from them, they’d just go. Jump. We had an interpreter shouting at them through a bullhorn, telling them to just give up, that we weren’t going to hurt them. But they had been told it wouldn’t be honorable to surrender. So, they were jumping in.”

Other than that trauma, Russ did not get injured during the war. He was a mine and booby-trap expert, but escaped unscathed. Many of his comrades did not. “I saw a helluva a lot of people bleed to death,” he says.

He and his crew were thrilled when the atomic bomb was used against Japan. “I was in Okinawa at that time, getting ready for God knows what,” he says in reference to the invasion of Japan’s mainland that mercifully never happened. “There was no remorse among any of us. We were thrilled. Hell, they’d [U.S. bombers] light the great city of Tokyo on fire [with conventional bombs], but those people just wouldn’t quit.”

The bombs dropped on Hiroshima and Nagasaki at long last got the Japanese to quit. And with that, Russ and his fellow soldiers were finally going home.

A few years later, Russ was called again, this time to fight in Korea. There, the 6’3’’, 195-pound former boxing champion got roughed up pretty good. On this Saturday afternoon, he stood and showed my son and I his leg that absorbed shards of shrapnel. “I lost a little hand grenade throwing contest to a group of Chinamen,” Russ explained calmly. “It took a year to heal.”

He was also shot in the shoulder, an injury that should have led to his death. He marvels at the Chinese soldier who stood atop him ready to squeeze a bullet into his head but never did. Did he think you were dead? I asked Russ. “I don’t know what the hell he thought,” Russ shrugged. “His officer called for him to get going and he just left. He let me go. Then our guys came and got me and put me on top of the hood of a jeep like a damned deer, and drove me away.”

John Russell Post was awarded the Purple Heart for his service in Korea. He showed us that and other medals humbly crammed inside a small, nondescript box containing the few war papers and memorabilia he saved.

After an unforgettable three hours at Russ’s home, my son and I had to go. We said goodbye to Russ, who bid us farewell with a few more lively thoughts and colorful language.

This is the time of year when we mark Veterans Day, paying tribute to guys like Russ who won’t be around forever. This is when we should seek them out. I ask: Who’s the Russ Post on your street? Maybe it’s time to finally drop in on a Saturday afternoon and say hello.