A “What If” Memorial Day

American History & Presidents A “What If” Memorial Day

The news could not have been worse. Starvation, malnutrition, diseases such as typhoid, smallpox, dysentery, and pneumonia, along with freezing temperatures that assaulted thousands of shoeless feet bloodying the snow, attached to bands of “walking skeletons” exposed to the elements by threadbare garments. They all combined to claim 2,500 lives from General George Washington’s army of 12,000 Continentals, who struggled through their encampment at Valley Forge during the 1777-78 winter. One bitter soldier wrote, “Poor food—hard lodging—cold weather—fatigue—nasty cloaths—nasty cookery—vomit half my time—smoak’d out of my senses—the devil’s in it—I can’t endure it—Why are we sent here to starve and freeze…?” 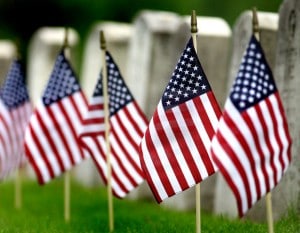 Why, indeed? Desertions were rife—“astonishing,” according to one observer—and mutterings of mutiny escaped from cracked lips of desperate, shivering volunteers, many of whom vowed to liberate themselves from their confinement as soon as their enlistments were up. Rumors of replacing General Washington were whispered in some ears—was there a conspiracy lurking in this misery?  Finally, a detachment from the Continental Congress showed up to query the good general about what was going on. Washington exploded:  “I’ve been leading this band of rabble under the worst conditions imaginable against the most powerful country the world has ever seen, and you have the unbridled impudence to question my leadership? That’s it, I’m done, I resign!” And he stomped off in fury, mounted his horse, and galloped away. Within three months, the British attacked what was left of the garrison, and the Americans aborted attempt to gain their independence and secure their rights for themselves and their posterity was quashed. History took a different and very uncertain turn.

That is not what happened, of course; but Valley Forge is just one instance representing many scores of crucial “What If” experiences in American history, involving the battles, agonies, and wartime hardships that American soldiers have endured on behalf of their country, often receiving due credit for their sacrifices, and, to our country’s shame, occasionally not. Indeed, who can plunge into the soul-numbing specifics of any combat in America’s wars without being humbled by accounts of bodies blown to bits, of mortally wounded soldiers still leading charges, of bravery so profound that it mocks our efforts to describe it? But describe such bravery and sacrifice, we must. And remember, we must. Indeed, who could forget?

Who could forget a “What If” scenario of the Normandy invasion, to cite another instance?  What might have happened if Erwin Rommel had persuaded Hitler and General von Rundstedt to alter the Reich’s Festung Europa defense in ways that would have slaughtered Allied forces on the beaches? A re-energized Germany is one answer, perhaps in a position to bolster its position on the Eastern front and fight the war to a stalemate with the Soviet Union, leaving the continent enslaved by two totalitarian powers while a demoralized United States, Great Britain, and Canada contemplate another invasion attempt in a year or so. All the while Americans at home wonder why we got into that war to begin with, as they read about General Dwight Eisenhower getting sacked and President Roosevelt dying even more prematurely from a heart attack.

Indeed, the “What Ifs” about the brave men and women who have sacrificed their lives for our country fill books, all of them fascinating, all of them disturbing. One last point needs to be made. I’ve had the privilege of visiting the Normandy American Cemetery—several times, in fact—bereft of speech and breath as my lonely steps walked softly and lightly among those perfectly aligned rows of crosses, with a scattering of tiny flags fluttering here and there. Then you come to a particular cross and stop. And read:

A COMRADE IN ARMS

KNOWN BUT TO GOD

I ponder this, of course. Silently. Reverently. I think of those intrepid 18, 19, and 20-year-olds storming the beaches of Normandy, facing murderous volleys of German machine-gun fire from MG-34s, and the terrifyingly high muzzle reports of Maschinengewehr 42s. Then my thoughts wander from those young heroes to some of their counterparts on American college campuses today, clamoring for “safe spaces,” demanding “trigger warnings” for speech that hurts their feelings, and sobbing about “micro-aggressions” that make them “uncomfortable.”

Dr. Marvin Folkertsma is a retired professor of political science and fellow for American studies with the Institute for Faith and Freedom at Grove City College. The author of several books, his latest release is a high-energy novel titled "The Thirteenth Commandment."