50 years ago: An assassination that shook America

American History & Presidents 50 years ago: An assassination that shook America

Editor’s note: This article first appeared at the Pittsburgh Tribune-Review.

It was 50 years ago today that a shocking moment of violence rocked America: the assassination of Robert F. Kennedy.

The tragedy erupted shortly after midnight June 5, 1968, at the Ambassador Hotel in Los Angeles. It should have been a great night for RFK. He had just achieved a grand victory, having won California in the Democratic primary. He was on his way to the party’s presidential nomination.

But not everyone in that building had similar plans.

After giving a jubilant speech, Kennedy was led from the podium toward the hotel exit via a carefully preselected back route through the kitchen. But someone was lurking along that path.

A 24-year-old Palestinian-Jordanian immigrant named Sirhan Sirhan jumped out from behind a cart stacked with trays and began firing a .22 revolver. He lodged three bullets in his intended victim, one directly in the head, entering behind the right ear and piercing Kennedy’s brain. Kennedy went down. He would never stand again. 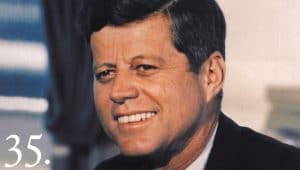 50 Years Later: JFK Remembered. On the eve of the 50th anniversary of the Kennedy assassination, Grove City College President Emeritus Dr. Richard G. Jewell ’67 offered his take on the crime of the century and what might have happened if John F. Kennedy hadn’t been killed that fateful day in Dallas. Click here to watch the presentation.

Why did Sirhan pull the trigger? The answer was simple: The young Palestinian was seeking vengeance for the New York senator’s support of Israel in the Six Day War the previous June.

Sirhan was vehemently anti-Israel when the Jewish state had defeated the Arab states. He vowed revenge, with Bobby Kennedy the chosen outlet for his anger.

Looking back, this was maybe the first major manifestation of Middle East terrorism in the United States, long before Sept. 11, 2001.

And yet, it is crucial to understand that this was a deadly act prompted not only by the evil of Middle East terrorism but also — albeit quite forgotten — by the evil of Soviet communism.

What did the Soviets have to do with this dirty deed? The answer: The Six Day War had been shamelessly provoked by the Kremlin.

Looking to exploit divisions in the Middle East and further exacerbate America’s foreign-policy problems at the time (especially in Vietnam), Soviet officials in May 1968 had cooked up false intelligence reports claiming that Israeli troops had been moved into the Golan Heights and were readying to invade Syria. Moscow peddled the malicious disinformation to Egypt and other Arab states hostile to Israel. The Kremlin wanted to provoke a military confrontation with Israel. And it worked. On this, there is no debate. It is a historical certainty.

Moscow had precipitated the Six Day War in June 1967, which, in turn, had prompted RFK’s assassin in June 1968. And the rest is history.

Today, 50 years later, the shooter is still with us. Bobby Kennedy is long gone. Who knows what might have been?