This weekend, I will celebrate the 50th anniversary of my high school graduation with most of the surviving classmates of the Cranbrook School Class of 1968. They became accomplished men (it was an all-boys school then), whose greatest common achievement has been to be solid family men.

Looking back, though, ours was not the typical exuberant graduation day. Our scheduled commencement speaker, U.S. Senator Robert Griffin (R-MI), had to cancel at the last minute to attend the funeral service for a fellow senator—Robert F. Kennedy (D-NY), who had been assassinated in California just two days earlier after having won that state’s Democratic presidential primary election. While we were all grateful to receive our diplomas from an extraordinary school, the tragedy of RFK’s murder cast a somber pall over the occasion.

Indeed, 1968 was the year when many baby-boomers—and in particular all the high school classes of ’68 across the country—lost our innocence. Our class had grown up during one of the happiest times in American history. We weren’t quite old enough to remember the Korean War, and so growing up in the ‘50s and ‘60s, it seemed as though peace, prosperity, and carefree times were the normal, natural conditions of life on earth. We were naive, of course, but it was, comparatively speaking, a glorious period.

In the ‘50s, we middle-class suburbanites never locked our house or car. The ‘60s seemed to open up limitless, brighter possibilities—from black-and-white TV yielding to color to the giddiness ignited by the Beatles to the breath-taking marvel of sending astronauts to the moon. There were occasional interruptions of the near-idyllic world of the Class of ’68—the assassination of President Kennedy in November 1963, periodic racial conflict, and the emerging tragedy of getting bogged down in a no-win military venture in Vietnam—but until 1968, hope, happiness, and optimism prevailed.

1968 was the year that the illusory bubble of a carefree world was popped for the Class of ’68. That was the year we lost our innocence. I’m sure that the several older graduating classes of baby boomers, having outgrown the cocoon of high school and entering into the responsibilities of adulthood during the mid-‘60s, had already left innocence behind, but for the Class of ’68, our naive, sheltered childhood came crashing down with a bang in that eventful year. 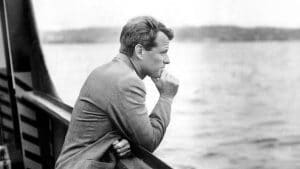 Read: The Assassination that Shook America

On April 4, 1968, the country was stunned by the assassination of Dr. Martin Luther King, Jr. I had grown up believing that fair play, respect, and freedom were universally accepted as “the American way,” but King’s murder violently showed that prejudice, hatred, ignorance, and injustice were far from vanquished.

Just two months and two days later, on June 6, 1968, RFK was also killed by an assassin’s bullet. For the second time in two months, a shocking and monstrously wicked deed battered the innocence in which I, and many of my contemporaries, had grown up. Those two assassinations were slaps in the face to the Class of ’68: Grow up, kids, the party is over, your society is coming apart at the seams, you’re getting your draft cards this year, and it’s now your turn to deal with the sometimes-grim challenges of adult life. (Please don’t feel bad for us. We all take turns grappling with difficult challenges. The ones who really had it tough in ’68 were the Americans serving in Vietnam War then. They had to experience the horrors of war while hearing about the apparent disintegration of the country they longed to return to.)

In 1968, American society entered a grim period of discord and tumult. The assassinations were followed by such convulsive events as the counterculture’s clash with Chicago police at the Democratic National Convention that August, the increasing incidence (and in some cases appalling anti-Americanism) of antiwar protests, the explosion of reckless drug usage, the acceleration of the trend away from church attendance, the exploding sexual revolution that glorified casual sex and spawned a wave of broken families and an abortion holocaust, etc., etc.

Indeed, 1968 was a pivotal year for me, for millions of my contemporaries, and for our country. Fortunately, I have learned a few worthwhile things in the decades since. I have learned that the USA, despite too often falling short of our highest values and ideals, is still the world’s last, best hope, and deserves our patriotic support. I have learned that this world will always be in a perennial battle between good and evil—the tares and wheat—and we owe it to ourselves and others to cherish and emphasize the wheat. Life in this world isn’t always easy or fair. But life gives each of us repeated opportunities to do things that make life worth living. Most importantly, I have learned that a merciful and loving God exists and will comfort us with a peace beyond anything this world can provide.