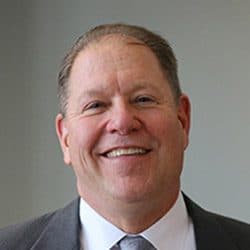 David Ayers has been Dean of the Alva J. Calderwood School of Arts and Letters of Grove City College since 2013. He currently serves as the Interim Provost. He is also a Professor in the Department of Economics & Sociology. Dr. Ayers has been at Grove City College since 1996. He completed his Ph.D at New York University, his M.A. at American University, and his B.A. at Edinboro University of Pennsylvania. His graduate degrees are in Sociology, but his undergraduate is in Psychology.

Immediately prior to coming to Grove City, Dr. Ayers lived in St. Louis and (among other things) headed his own company there. This included research and consulting for firms as va ried as Anhauser – Busch, Milliken Publishing, and Practical Homeschooling Magazine. In fact, in his work for Anhauser – Busch, Dr. Ayers scripted a film “starring” A – B’s Chief Financial Officer, and he wrote a stage presentation that was performed by popular television personality Regis Philbin for an audience including, among others, the mayor of St. Louis.

Dr. Ayers’ varied background also includes being on Sociology faculty at The King’s College in New York and at Dallas Baptist University in Texas, servin g as a Special Research Affiliate in the Department of Housing and Urban Development’s Office of Policy Studies, and working as Research Associate for a Washington D.C. consulting firm, carrying out studies in the healthcare field. He also completed two na tional studies of pro – life pregnancy centers for a consortium of interested parties in D.C. that included the U.S. House of Representatives Pro – Life Caucus. The latter studies were widely covered in the press at the time.

He has also been a mental health worker, delinquency counselor, headed a residential unit for severely emotionally – disturbed and violent male youth, short – order cook, bus boy, construction laborer, poet and song – writer, and guitarist and back – up singer in two bands, but not necessarily in that order. As a boy he lived in both Athens, Greece and Frankfurt, Germany as his father served in covert operations in the Central Intelligence Agency.

Dr. Ayers latest book, Christian Marriage: A Comprehensive Introduction, is due to be released by Le xham Press in Fall 2018. Ayers previously published two books with the major academic publisher Cengage: Experiencing Social Research (2002) and Investigating Social Problems (2005). His research essay, “The Inevitability of Failure: The Assumptions and Im plementation of Modern Feminism,” appeared in a volume edited by John Piper and Wayne Grudem titled Recovering Biblical Manhood and Womanhood which won Christianity Today’s “Best Book of the Year” and “Best Book in Theology” awards in 1991, and is now out in a second edition. Ayers contributed two major essays to the Omnibus Reader series edited by Gene Veith, Douglas Wilson and G. Tyler Fischer for Veritas Press the first on “Cultural Anthropology” and the second on “Sociology.” Dr. Ayers has also written popular articles in magazines such as Practical Homeschooling and Crosswinds.

David Ayers’ hobbies include hunting deer (rifle and archery), fishing, playing his collection of guitars and jamming to the tunes of such artists as Led Zeppelin, Jimi Hendrix, ZZ Top, Stevie Ray Vaughan, Johnny Winters and Joe Bonamassa. More than anything else other than his relationship with his Lord and Savior Jesus Christ, Ayers is happy to be blessed with a wonderful family that includes his wife Kathy, six children, three sons in law, and four grandchildren. He resides in Grove City Use the best HTML, CSS, JavaScript resources to get the perfect code in your web projects.